The hottest trend in corporate culture is documentation

When we think of documentation as a form of communication, it’s hard to find fault in any company whose culture leans more toward informal and synchronous comms instead. Seemingly, these are all just communication approaches, and to each their own as far as corporate culture is concerned.

This all sounds reasonable on the surface, yet it glazes over a fatal flaw in our assumption: documentation’s core value is not communication, but rather, commitment. Once we acknowledge the nuance of this definition, its impact on corporate culture becomes inescapable.

Documentation commits the expectations, boundaries, and consequences of teamwork, so that hire number 500 can have the same perspective as hire number five. It commits the actions taken up to a certain point, so we can blaze new trails or retrace our steps. It commits the values that motivate decisions and rewards, so hierarchies don’t trump transparency.

The commitment distinction is crucial because it takes accountability for the fact that communication will always happen, regardless of documentation. Some of a company’s most influential mantras may echo through the halls as ancient, anonymous gossip — a hallmark of toxic corporate culture.

“No one gets 5s in their evaluations here.” Is that true? Is it only true in some departments? Was it perhaps previously true, under different management? If it’s still true, why? Who said that? What happens if someone gets a 5? Is it safe to ask these questions?

Notice how the problem with this information isn’t that it hasn’t been communicated, but that it’s absolved of any accountability. That’s a bug in corporate culture, not a subjective trait — and it places an immense burden on top-down leadership structures to be hands-on across the business, which is why it’s both the easiest model to fall into at seed stage and the hardest to scale at growth stage. 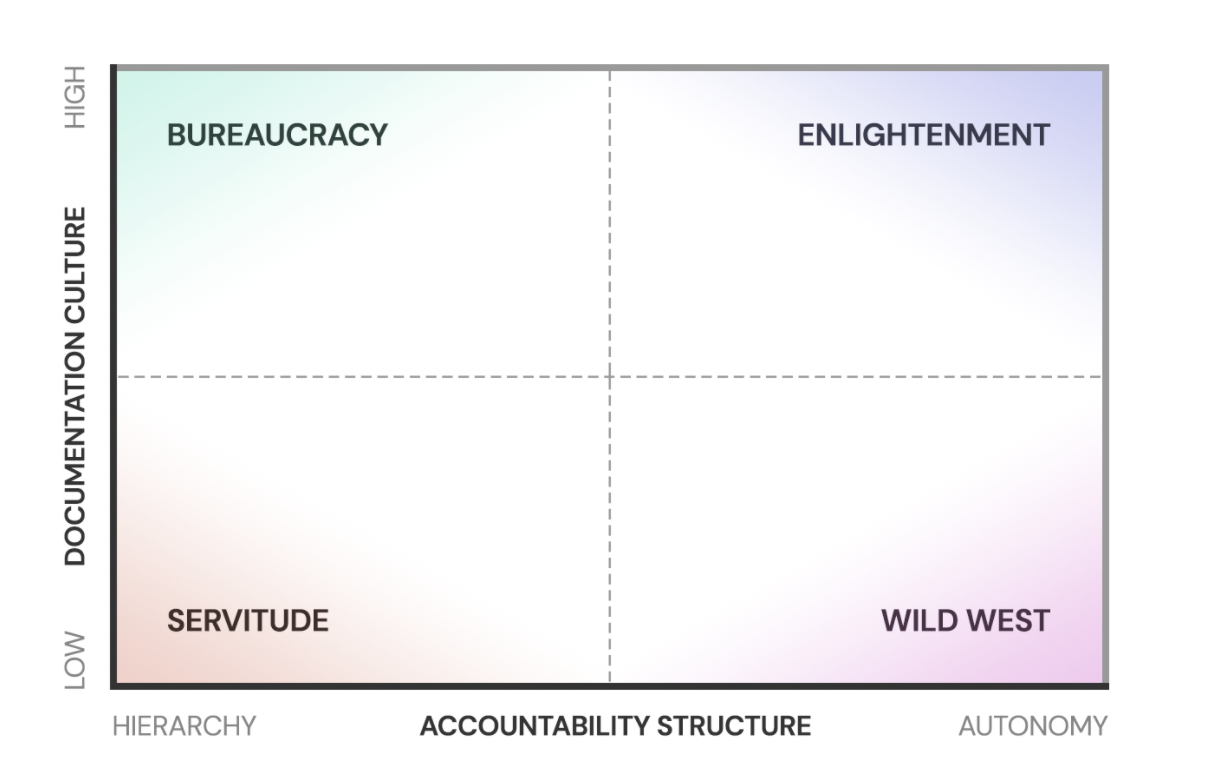 If all this sounds like rhetorical theory, let’s look at it through a real-world lens to gain a more practical perspective:

Salaries are among the most oddly opaque aspects of corporate culture: the mother of all secrets, despite the fact that they are calculated using a trove of shared data. Buffer famously commits to a documentation culture here by publicizing their salary policy — not just what the jobs pay and what variables go into the compensation formula, but what each of their current employees makes, and why the company values its people in this way.

Quick note: documenting the “why” is deceptively attractive from a leadership standpoint; later in the article, we’ll come to understand what makes Buffer’s documented “why” so much more valuable than a typical employer’s “why.”

We’ve mentioned values a few times now, and so often a lack of shared values is emblematic of a toxic corporate culture. GitLab commits the entirety of its company values to public record and doubles down by publicizing the company’s quarterly objectives as well. The largest investor and the smallest customer both know what GitLab values.

Stripe made headlines years ago for taking documentation culture to a meta-level, with email transparency. Most of the company’s documented communication over email is committed to company-wide distribution lists, as a repository any employee can access at any time (if this sounds like a precursor to Slack, that’s no accident — best practices often end up building new collaboration tools). It’s a testament to the transparency of the company that every email is held accountable for what it says.

Be sure to notice a recurring theme here: documentation culture builds well-aligned teams, sure … but it also attracts well-aligned people, which is often referred to as “cultural fit.” Commitment that everyone can see (especially those who don’t work for the company yet) is arguably the fastest shortcut to a curated pipeline of prospective talent. And, given the recent explosion of remote and hybrid working arrangements, hiring might be one of the hairiest topics in corporate culture today. Using that context as an example, let’s consider a mental model for understanding documentation culture: the “P” Progression.

Perception, Policy, Principle, Proof. Each subsequent “P” level helps to commit accountability to the level prior. Here’s what that might look like at four companies sharing a similar cultural perspective on hiring, but operating at different levels of documentation culture:

Level 1: Perception. Some have heard that the C-suite only wants to hire on-site workers. There’s nothing in the handbook about it. A few hiring managers have brought on remote workers, though it’s unclear whether those were exceptional roles, or if the managers had to deal with any consequences … but generally, everyone seems to be advising each other that we only hire on-site employees.

Level 2: Policy. A team lead sent out an email stating, "Our department only hires for on-site roles." The statement can also be found in public-facing job descriptions. No one has heard much about why we have the policy, or how flexible it might be in the future, but at least we know the boundaries around hiring by location.

Level 3: Principle. An executive published a blog post talking about the “why” behind the policy of only hiring on-site. They’ve said the policy strikes them as the most effective way to collaborate and helps build camaraderie across departments since everyone is local and easy to gather for cross-functional events.

It’s not clear what internal evidence or external data this exec is using to validate their position, but it’s certainly clear what their mindset is, and how it will shape our company. Further, it seems that if any of us disagreed with these principles, we’d know who to confront about them.

Level 4: Proof. On the public-facing company wiki, or documented in the organization’s work hub, there’s a lengthy message from the CEO about the principles forming their policy to hire on-site workers exclusively. Most of those principles are accompanied by tangible proof — whether it’s an employee survey, or a series of industry studies — which are said to serve as the basis for their policy decision.

At the end of the post, the CEO states, “We are always open to changing this policy in the face of contradicting evidence, such as next quarter’s employee survey, or newly-emerging research, or collaboration innovations. Below is a table of proof points, open for all to update as new evidence presents itself. Our stakeholder for this policy is the Head of HR, and any employee with an interest in challenging the policy can schedule time with them during office hours.”

With the rare exception of people who thrive in toxic environments, or people who erroneously conflate a shared bias with a healthy environment, the vast majority of us would likely prefer to work for the company operating at Level 4 here — even though all four companies appear to have similar cultural perspectives on hiring.

That’s because commitment is its own cultural currency. The more commitment an employer pays forward, the more they get in return from their employees. And in our business relationships, the easiest way to mine that commitment is through documentation.

Mitch addresses the technological convergence of skillsets and behaviors across myriad industries; typically doing so from the comfort of his van. Occasionally he can be found conducting social experiments in remote work, or hosting the Telekinetic podcast. Named one of 2021's Top 75 Minds In Remote Work.

What is digital dexterity and why does it matter?

Digital dexterity has been and will continue to be the measurement that distinguishes successful businesses from those that fail.

Everything you need to know about meetings for remote teams

Scheduling real-time meetings for remote teams can be tricky, which is one reason why many remote teams are converting to an async majority.

How to set standards for productivity & collaboration in your company.