More posts
The ingredients of innovation
How to enable innovation in a digital world - according to MIT’s Dr Philip Budden.
Future of work
How technology transformed our perception of time
Technology has opened our eyes to a world beyond the 9-5. It's time our work culture reflected that, says Siobhan McKeown, COO of Human Made.
Future of work
The end of an era
We need to think bigger. Something new is coming.
Future of work
Product
Tool stack
Share this article:

It’s easy to rely on Slack as your only personable tether to your coworkers. But amidst the GIFs and weekend catch-ups, there’s actual work and files getting thrown back and forth in different DMs and threads.

In 2016, remote-friendly Doist quit using Slack and opted for an internal message board. CEO Amir Salihefendic cited the instant messaging platform’s addictive qualities, the inability to conduct in-depth conversations, and general disorganization as the determining factors for finding a more async-friendly alternative.

Doist is a great company to look at for being ahead of the curve in many aspects. For one, author Cal Newport’s notion of the “hyperactive hive mind” is catalyzed by constant pings, switching apps, and instant messaging adrenaline — part of what Doist was looking to find a solution for almost five years ago.

Most of the communication and collaboration issues that plague today’s workers existed years ago, and Doist is great proof of that. Now that we’re all experiencing more remote-friendly models, these massive gaps in our working habits are becoming rapidly apparent.

Slack is just one example of app chaos

Slack launched in 2009. Asana was founded in 2008, and Zoom came in 2011. The productivity and messaging tools most of us are familiar with have populated the market for upwards of ten years.

And whether or not they were founded on the promise of solving for increasing hybrid work needs, that’s exactly what they’ve been adopted for. For the most part, these tools serve their purpose. They deliver a fantastic user experience for the specific use case they were designed for.

But these days, knowledge workers need tools that work together. They need a solution that doesn’t dredge up five more problems when trying to find them. The amount of tools we have now lends a great metaphor for the number of papers I imagine messy desk drawers had before computers were invented.

The delayed gratification of async work

Slack isn’t productivity’s biggest enemy, but the correlation between instant messaging and gratification doesn’t mix well with async or remote-friendly working models. A majority of asynchronous communication works because it allows people to get things done in their own time frame, and sometimes in their own time zones. Because of this, there is limited instant validation or gratification.

We’ve developed tool fatigue for a lot of reasons. Perhaps one of the most logical reasons is because in our search to find the best applications to speed up/make work more productive, we became more and more used to a wall of notifications and instant gratification.

And I know I’m not the only one to continuously shift through tabs or tools to search for comments or feedback. Employees are digging through cloud storage systems, scouring message channels and cycling through tabs, wasting around 59 minutes per day. 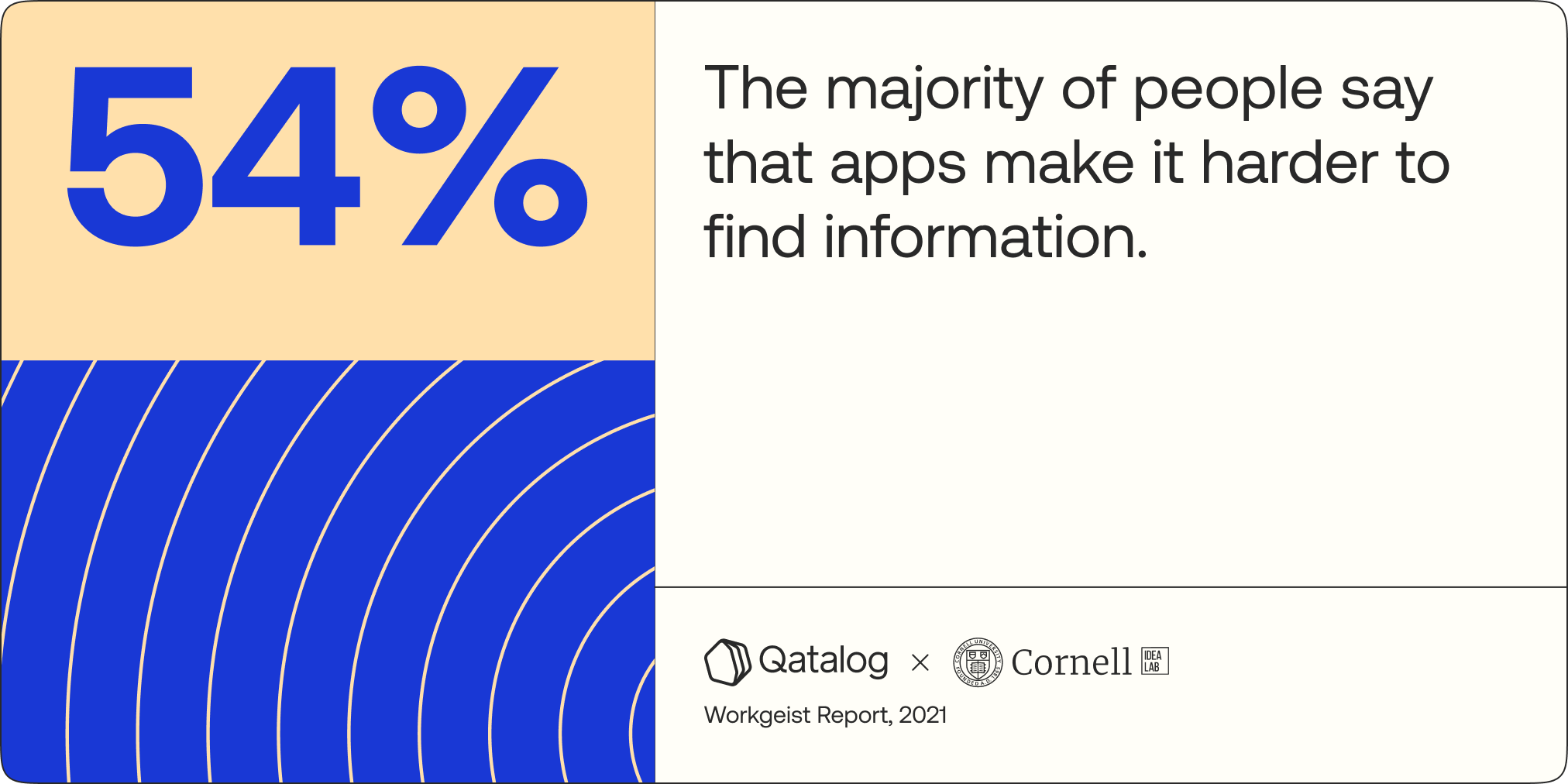 New research from Qatalog and Cornell University shows that productivity tools are actually killing productivity. Human brains were not wired for a working day of glancing between instant messaging, various documents, project management platforms, and more. 45% say this makes them less productive and 43% say it is tiring to regularly switch between tools and communications channels.

In order to be a people-first hybrid or remote company, your organization and employees have to improve their async literacy. What does this mean exactly? It means prioritizing the procedures that help your teams to collaborate confidently and communicate effectively. Improving discoverability and transparency within your company directly impacts your async literacy, because it puts the power in the hands of employees rather than gatekeeping the information they need.

Knowledge sharing has never been easy

54% of people say that applications can make it harder to find information. One in two employees says they’re not always certain the information and updates they’re posting within their company's apps are reaching their intended audience.

In the age of the knowledge worker, sharing information should be organized and specific. Because of our tool portfolios, it’s anything but. Accessibility ranges between teams and seniority levels. Having too many apps actually restricts our access to knowledge rather than opening information up to the entire company. What was once an array of tools that opened the working world to the possibility of remote and distributed workers has spiraled into unnecessary friction for employees.

Clean up your app landscape

Doist turned to an internal messaging board. Your company could do the same thing, but then you may run into the crux of having yet another solution that solves a singular problem. That’s why many companies are shifting to a work hub so they have a connectivity layer for their maze of tools, people, and work.

This new way of working can allow teams to rise above the instant gratification of the hyperactive hive mind and graduate to a more satisfying level of performance. One where team members are aligned, engaged, and have space for deep work — and where order trumps chaos.